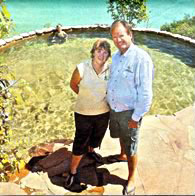 They say time at Faraway Bay is measured in tides and sunsets. The water is clear and deep and the big sky an endless blue. Sound like paradise? Well, that’s because it is.

For Perth business couple Kevin and Kathie Reilly the utopian blue waters of Faraway Bay on the remote Kimberley coast have become the ultimate sea change.

In search of a second business to complement their seasonal Perth operation, Caribou Charters, Mr Reilly said he was “blown away” when he flew to the Faraway Bay resort after seeing an advertisement in Geraldton.

Having bought the 25ha property, 280km north-west of Kununurra, from Kimberley legends Bruce and Robyn Ellison earlier this year, the Perth couple have spent the past month settling into what will be their home for six months each year.

Mobile phone coverage is unheard of here, stars provide the night-time entertainment, groceries arrive once a week by plane and freshly caught fish is a staple.

As one staff member comments: “Even the toilets are flushed with spring water.”

Although neither party to the deal will reveal what paradise costs, one industry source estimated the remote Kimberley property to be worth between $3 million and $4 million.

But paradise also has its hazards. “There’s a big croc which comes into the bay every now and then .. . he looks like a battleship when he glides in,” Mr Reilly says.

“He comes in here and checks on his harem of girlfriends up the creek and then cruises off again.”

While Mrs Reilly will spend time in Perth, where the couple’s youngest son Griffin, 13, goes to school, her husband will remain on the Kimberley coast throughout the tourist season.

Looking out over a spring-fed plunge pool, the former rock lobster fisherman does not pause to think when asked if he will miss city life. “No, I don’t think so,” Mr Reilly laughs.